Nigerian Music artiste, Kizz Daniel has revealed his aim and inspiration of performing his latest song, ‘Buga’ at the coming FIFA 2022
Kizz Daniel also known a Vadoo d great and the CEO of flyboy music took to his Twitter page praying that God should enable him sing on the world stage alongside the mass choir, he also begged all his fans and followers to help him say amen 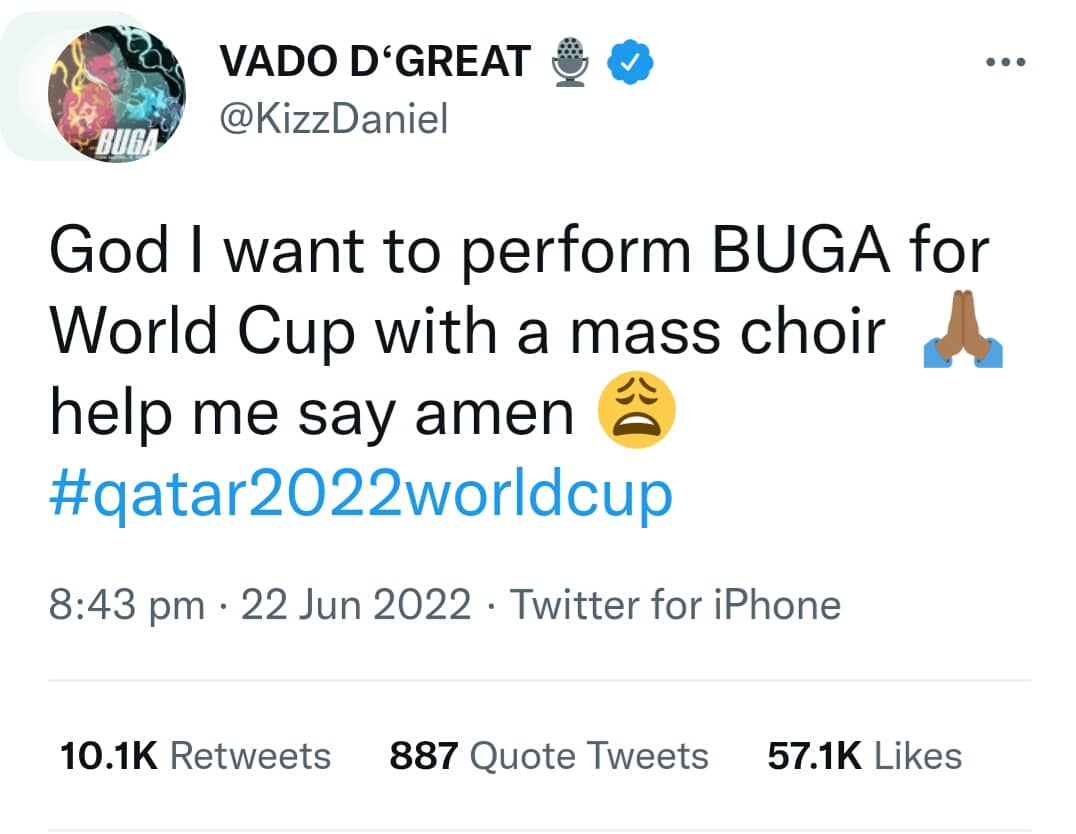 The Music Video for the single was released by the singer on Wednesday, June 22, barely a month after the official single debuted.
Kizz Daniel sang the song in collaboration with Afro beat singer, Tekno Miles.
Taking to his Twitter page on 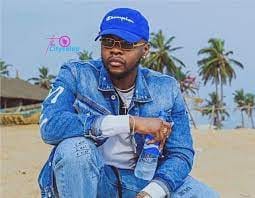 Wednesday night, Kizz Daniel stated that he would love to take the new song to an international level. He mentioned that he wants to perform alongside a mass choir on the world stage.
The song “Buga” is indeed a great song and many music Lovers sing and hype it, the video which was released on the 22nd of June 2022 has hit various milestones, It got more than 3million likes in less than 48hrs, had 2.2 million views in just 24hours and to crown it all, the audio file has maintained first position for over five weeks.
Pulse reads “Buga (Lo Lo Lo)” is already the third most-streamed song of 2022 and No. 38 most-heard song on radio – and No. 10 overall song of 2022 so far (this is based on the Mid-Year data compiled by TurnTable Charts. The rest of the report will be available in July.”
As a result, “Buga (Lo Lo Lo)” is now the longest No. 1 of 2022 – it spends a sixth week atop the chart to break the tie with Black Sherif’s “Kwaku The Traveller” and Skiibii & Davido’s “Baddest Boy (Remix)” [5 weeks at No. 1].
With “Buga” tallying a sixth week at the summit, Kizz Daniel becomes the first artiste to have multiple songs spend over five weeks at No. 1. The artiste first No. 1 “Lie” spent seven weeks atop the chart in 2021.

Punch.ng also states The music video was posted to YouTube in the evening of Wednesday, June 22, 2022, and as of the time of filing this report by 2pm on Friday, June 24, it already had over 3.8 million views.

listen to the song below

The video which had a carnival theme features Kizz Daniel, Tekno, and skit maker, Oga Sabinus.
Recall that the song was an instant hit on social media, with several people recording videos of themselves dancing to the song. Notable personalities that have publicly danced to the song include Liberian President, George Weah; a former Minister of Transportation, Rotimi Amaechi.

The song was also played several times at the recent presidential primary of the All Progressives Congress. On May 19, 2022, a music app, Shazam, took to their Twitter page to announce ‘Buga’ as the most Shazamed song in the world. It was also the first song to amass one million streams within 24 hours on Boomplay Music.
Daniel also started a ‘dance challenge’ for the song and several people across the world participated in it. The singer went on to give some of the participants a N1m naira cash prize.
The song is indeed a great song which has gone a long way, fans are being called upon to support this star who has seen it fit that he brings joy to this fans.
We hope that Kizz Daniel gets his own heart wish, I am sure that many fans of his are praying in consistency with regards to Kizz Daniel’s Success
The song Buga is indeed a banger, a mind-blowing song do well to download the song and watch the video here.

You can also find us here:

If you ever used this Olympic 2B exercise book as a child in a Nigerian school, note that the iconic image on the cover is of Ifeajuna’s Gold medal winning high jump from the 1954 British Empire and Commonwealth Games. He was executed 55 years ago today, in BiafraEDloaded.com 🙌💯 ... See MoreSee Less

NEWSPAPERSNigerian Newspapers: 7 things you need to know this Monday morningPublished on September 26, 2022By Ochogwu Sunday  Good morning! Here is today’s summary from Nigerian Newspapers:1. It was a black Sunday in Lagos State when a commercial bus caught fire, killing seven passengers, while others were injured.The incident happened at the popular Iyana Oworo near the Third Mainland Bridge.2. Ahead of the 2023 elections, former President Olusegun Obasanjo has said Nigeria needs a government that has a proper understanding of governance. Obasanjo said this at a colloquium organised to mark the 113th anniversary of Kings College, Lagos.3. A former Secretary to the Government of the Federation, Babachir Lawal, has again spoken against the Muslim-Muslim ticket of the All Progressives Congress, stating that Christian politicians in Northern Nigeria would remain steadfast in their stand for justice, equity and fair play.4. Two suspected fraudsters, Rotimi Fisher and Sherif Adebayo have allegedly defrauded a 23-year-old girl in the Ipaja area of Lagos State. The suspects reportedly lured the victim to an uncompleted building on Majiyagbe Street, Ipaja, where Adebayo allegedly raped her.5. The campaign team of the Tinubu-Shettima Presidential Campaign Council has directed all the newly appointed 422 members to turn up at the PCC headquarters in Abuja for ‘special prayers’ to officially kick-off Wednesday’s electioneering campaign.6. The Northern Elders’ Forum, on Sunday, said it will subject candidates of various political parties seeking the votes of the north to a rigorous interrogation exercise until they are convinced about who has the capacity to fix the country. This clarification was made by NEF Spokesman, Dr Hakeem Baba-Ahmed, when he appeared on Channels Television.7. A teenager, Daniel Akindele, has allegedly stabbed his friend, Ayo Bameke, to death during a fight over food at Abattoir Complex in the Agege area of Lagos State. It was gathered that Akindele and Bameke, alongside other friends, visited the complex to play football when the incident occurred following a degenerated argument about food. ... See MoreSee Less

We use cookies on our website to give you the most relevant experience by remembering your preferences and repeat visits. By clicking “Accept”, you consent to the use of ALL the cookies.
Do not sell my personal information.
Cookie SettingsAccept
Manage consent

This website uses cookies to improve your experience while you navigate through the website. Out of these, the cookies that are categorized as necessary are stored on your browser as they are essential for the working of basic functionalities of the website. We also use third-party cookies that help us analyze and understand how you use this website. These cookies will be stored in your browser only with your consent. You also have the option to opt-out of these cookies. But opting out of some of these cookies may affect your browsing experience.
Necessary Always Enabled
Necessary cookies are absolutely essential for the website to function properly. These cookies ensure basic functionalities and security features of the website, anonymously.
Functional
Functional cookies help to perform certain functionalities like sharing the content of the website on social media platforms, collect feedbacks, and other third-party features.
Performance
Performance cookies are used to understand and analyze the key performance indexes of the website which helps in delivering a better user experience for the visitors.
Analytics
Analytical cookies are used to understand how visitors interact with the website. These cookies help provide information on metrics the number of visitors, bounce rate, traffic source, etc.
Advertisement
Advertisement cookies are used to provide visitors with relevant ads and marketing campaigns. These cookies track visitors across websites and collect information to provide customized ads.
Others
Other uncategorized cookies are those that are being analyzed and have not been classified into a category as yet.
SAVE & ACCEPT
wpDiscuz
0
0
Would love your thoughts, please comment.x
()
x
| Reply